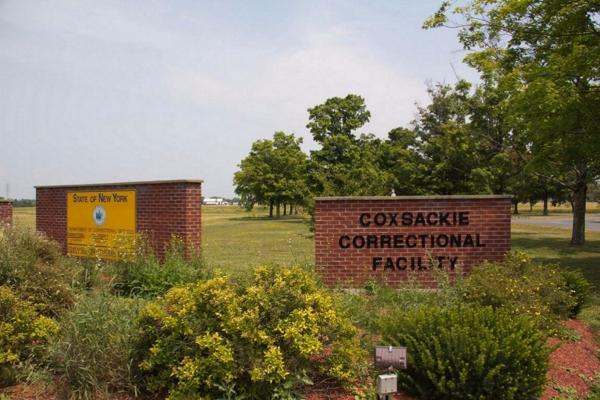 The entrance to the Coxsackie Correctional Facility. Gov. Andrew Cuomo’s 2020-21 budget proposal to close more state prisons is drawing an angry response from the New York State Correctional Officers and Police Benevolent Association, which warns that although the prison population is declining, violence inside the prisons is rising.

ALBANY — With inmate populations on the decline, Gov. Andrew Cuomo proposed legislation Tuesday that would allow for more state prisons to be closed.

“...the governor is authorized to close correctional facilities of the Department of Corrections and Community Supervision in the state fiscal year 2020-2021, as he determines to be necessary for the cost-effective and efficient operation of the correctional system, provided that the governor provides at least 90 days notice prior to any such closures to the temporary president of the Senate and the speaker of the assembly,” according to the proposed law.

The governor did not specify what or how many prisons could be eliminated.

The New York State Correctional Officers and Police Benevolent Association had serious concerns with the proposal, according to a statement released Tuesday.

“At a time when prison violence is at an all-time high, the governor and the Legislature should be working with us and our members to find solutions to make our prisons safer,” NYSCOPBA President Michael B. Powers said. “The last thing we need is incarcerated individuals tightly crammed into prisons, creating nothing more than a powder keg of violence.”

At Coxsackie Correctional, inmate Kyle Johnson, 32, is accused of assaulting a correctional officer Nov. 4 when the officer attempted to frisk Johnson for contraband.

The officer, who has not been identified, was transported to Albany Medical Center and treated for a fractured orbital bone, fractured cheekbone and a broken nose. He did not return to duty, according to the union.

Johnson, who was serving an eight-year sentence for first-degree burglary and first-degree use of a firearm, both class B felonies, was arrested by state police and charged with assault while confined in a correctional facility, a class D felony.

Another assault by an inmate took place Dec. 20 at the medium-security Greene Correctional Facility in Coxsackie. Three officers were injured in the attack, according to the union.

Over the last 20 years, state prisons have seen a 39% reduction in the inmate population, but violence in state prisons is on the rise, according to the union.

“The governor’s call for more prison closures is shortsighted and fails to consider the devastating impacts a closure can have on the men and women working inside the facilities, their families and the surrounding communities,” according to the union. “Fifteen prisons have closed under Gov. Cuomo’s administration, forcing consolidation of the state’s most dangerous criminals into close quarters with one another.”

With a decline of 30,000 inmates, NYSCOPBA is calling for the elimination of double-bunking, a practice the union believes is no longer necessary and infringes on the safety of both inmates and staff. Double-bunking places two inmates in a cell built for one.

No specific facilities have been selected for closure. Livingston and Lincoln correctional facilities were selected last year by considering factors such as infrastructure, programs, security, specialized care and the proximity of other facilities.

“The closures will eliminate approximately 1,200 vacant beds without impacting the safety and security of the 52 remaining facilities,” DOCCS spokesman Thomas Mailey said. “The department’s closure plan provides a variety of options for staff to transition to other facilities or state agencies and continue their employment with the state.”

Projected savings from closing the facilities is estimated at $35 million, according to governor.ny.gov.

Cuomo has closed 24 prisons and juvenile detention centers since taking office in 2011, saving $162 million, according to governor.ny.gov.

The closures are made possible by declining state prison populations.