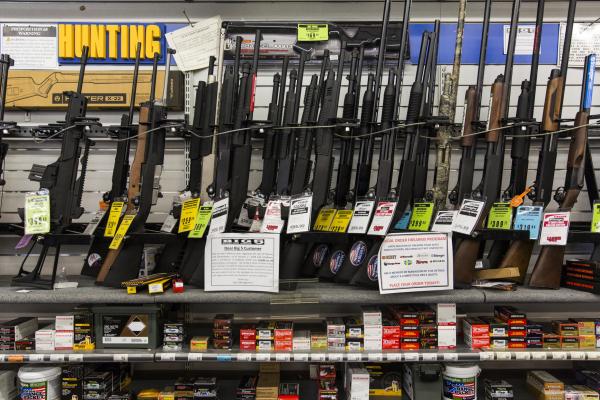 FILE — Guns and ammunition are displayed for sale at a shop in Sacramento, Calif., on May 7, 2018. More people died from firearm injuries in the U.S. in 2017 than in any other year since at least 1968, according to data from the Centers for Disease Control and Prevention.

ALBANY — Local law enforcement expressed concerns about a new law that would allow people to petition the court to take guns away from people who may be a danger to themselves or others.

Gov. Andrew Cuomo signed legislation Monday that would allow people to petition the court to issue an order, similar to an order of protection, that would keep certain individuals from purchasing or owning a firearm.

The Red Flag Law would allow someone to apply and the court to issue what is called an extreme risk protection order prevents individuals who show signs of being a threat to themselves or others from purchasing or possessing any kind of firearm.

A petitioner can file the application for an extreme risk protection order in county court along with supporting documentation.

The court can then issue a temporary order based on several criteria including threats of violence, violations of orders of protection, any pending charges involving a firearm, reckless use of firearms and evidence of recent or ongoing substance abuse.

The new law could be a useful tool to prevent violent incidents, but has the potential to be abused, said Greene County District Attorney Joseph Stanzione.

“This law is interesting because it could be a useful tool in some extreme situations,” Stanzione said. “For example, there is an individual who owns guns and starts speaking in a way that suggests they will hurt themselves or others. The person who files for an order is either a person who has a sincere concern for this person or has been a target of a threat. There is an immediate removal of the person’s weapons and a quick hearing process.”

The law requires a hearing from three to six business days after the temporary order is issued.

Abuse already exists in the process for orders of protections, Stanzione said, and those same abuses could exist in this new process.

“People can file for an order to cause someone to lose their job or have their guns taken away,” Stanzione said. “There should be extreme penalties for such abuse. If someone is making a claim for vindictive reasons, it can be determined if the petitioner does not show up to the hearing or in hearing testimony.”

If the claim is found to be baseless, the record of the petition should be expunged, Stanzione said.

“If we go to a domestic situation and there is violence, we take the guns,” Seeley said. “Often, we are called to investigate a dispute, but if someone comes to this office and complains about someone who may hurt themselves or others, we are going to look into that.”

“I am concerned about law-abiding citizens who own guns. Leave them alone. It’s their Second Amendment right,” Seeley said. “If you commit a crime with a gun, it is game on. We are coming to take your guns away.”

“The first year of President Trump’s administration, we lost 40,000 people to gun deaths — the highest number in 50 years,” Cuomo said Monday. “New York led the way by passing the strongest gun safety laws in the nation, but more must be done to end this carnage.”

“We are empowering teachers not by giving them guns like the president wants, but by arming and empowering them with the law, so when a teacher or family member sees there is a problem, they can go to a judge and get a court-ordered evaluation,” Cuomo said. “The Red Flag Bill will save lives and doesn’t infringe on anybody’s rights and it is common sense.”